Your dog’s immune system helps to keep him healthy every day. A properly functioning immune system can protect him from bacteria, parasites, viruses and even devastating diseases such as cancer.

The immune system has several components. Best known are the white blood cells, which are produced in the bone marrow and circulate throughout the body via the lymphatic system. Specialized cells called antibodies are able to identify cells infected with viruses, bacteria, fungi and even cancer. Once identified, the infected cells are deactivated and killed.
The immune system is also capable of filing away the identity of viruses it has successfully cleaned. Specialized memory cells can store this information for years, then quickly launch antibodies to disarm the virus when it next enters the body, before it causes illness.

This cell-mediated immunity is the mainstay of the immune system. It activates cell-eating macrophages as well as natural killer cells, which release strong toxins that deactivate viruses and bacteria.

Rounding out the immune system are thousands of inflammatory chemicals including histamine, bradykinin, prostaglandins and cytokins. And at the center of it all is the digestive system, which houses a built-in mechanism that can differentiate normal, healthy gut bacteria from pathological organisms like salmonella and E. coli.
Imagine the chaos that would ensue if the immune system were to suddenly become confused and unable to distinguish self from foreign invaders. This is essentially what happens with immune mediated or auto-immune disease.

Because conventional medicine has few treatment options without side effects, immune mediated disease is a growing concern in veterinary medicine and offers a niche for holistic medicine. Vaccinations have been implicated, and research has confirmed this. There may be a genetic predisposition and chemicals can also be to blame. I’ll discuss potential causes in more detail in Part II of this article, coming in the July-August issue.

The name of the auto-immune disease lupus derives from the Latin word for wolf, and dates back to the 14th century when the disease was blamed on wolf bites. (Poor wolves get blamed for everything!)

Lupus is a common form of immune mediated disease in dogs. It results from the immune system reacting against the dog’s own DNA. There are two types of lupus.
Discoid lupus erythematosus (DLE), sometimes called Collie nose or nasal solar dermatitis, is the more common of the two. It affects the skin, often just in the nose area, but sometimes can also extend to the bridge of the nose, the mouth and ears. DLE occurs when the immune system’s cells react to the DNA of sloughed skin cells, apparently confusing that DNA for viral DNA. The first sign of the disease is often a loss of nose pigment, followed by scaliness or crustiness of the skin on the nose.

Systemic lupus is rarer, but potentially fatal. It’s most common in certain breeds such as Beagles, German Shepherds, Collies, Shelties and Poodles. It causes inflammation not only of the skin but the joints, and can harm major organs such as kidney, heart and lungs.

Antibody/antigen complexes (also called type III hypersensitivity) can plug up the kidney nephrons; they are also deposited in the synovial membrane that lines the joints, and in the skin and blood vessels, causing damage to joints, heart and lungs. Because it affects many body systems, systemic lupus can be hard to diagnose. The most common symptoms are lethargy, loss of appetite, muscle pain, hair loss, skin lesions and de-pigmentation, increased urination and fever. Symptoms can be aggravated by sunlight so the dog’s condition will likely worsen in summer.

Another inflammatory joint condition is immune mediated polyarthritis (IMPA). IMPA can be triggered by several underlying diseases (including tick-borne diseases) that cause cartilage and bone loss in multiple joints. Initial symptoms are lameness or stiffness, causing an awkward gait. This disease is very responsive to weekly acupuncture treatments.

Canine lupoid onychodystrophy or “sloughing claw disease” is a painful condition of the claw beds that causes the claws to slough off entirely, leaving an exposed vessel and nerve. The first sign is usually the loss of one or two claws but over time may extend to all of them. The affected feet are often itchy or painful. This is common in black dogs like Giant Schnauzers and Poodles but also in Greyhounds.

In perianal fistula disease, primarily a German Shepherd problem, the sebaceous glands around the anus are attacked, causing them to abscess, open and get infected. Early symptoms include straining or pain on defecation, bleeding, and biting or licking the anal area. I have found perianal fistula disease along with immune mediated anemia (in which the immune system attacks the red blood cells) and thrombocytopenia (in which the immune system attacks the platelets) to be the hardest to treat, possibly because the dogs are already on so many immune-suppressing medicines. Some holistic veterinarians are reporting success using ozone therapy to heal perianal fistulas.

Certain types of inflammatory bowel disease, food allergy, allergic bronchitis, asthma, pancreatitis and gastroenteritis are all red flags for immune mediated disease. This is where holistic medicine shines. Acupuncture and herbs are essential, but I also use NAET (Nambudripad’s Allergy Elimination Techniques) to isolate any food or environmental triggers. Good nutrition in the form of a homemade cooked or raw diet is also crucial.

Tucker was a four year old black Labrador with a severe case of cutaneous vasculitis (an inflammation of the blood vessels) affecting the tips of his ears. For months, Tucker had been shaking his head, causing blood to scatter all over walls and furniture. The pain also caused him to rub his head on the ground and it even affected his personality.

Dermatology specialists prescribed Atopica and prednisone to suppress inflammation, plus pentoxifylline, a drug that helps cells get through tight vessels. Like so many dogs with immune mediated disease, Tucker had also been prescribed a wide array of antibiotics.

When he came to me, Tucker was wearing a bonnet over his ears to prevent ear shaking and bleeding. Since his people were game to try anything at that point, I started with tongue diagnosis and a detailed history. His red and cracked tongue showed me that his toxic blood was depleting his vital organs and his vital force had sunk inwards so as to preserve the very core of his body.

I also found out that Tucker had survived parvovirus. The emotional toll of his hospitalization and isolation was critical to his history, as was his over-vaccination after surviving the disease. The first step in Tucker’s treatment was acupuncture, bloodcooling herbs and immune-modulating herbs, as well as reducing his conventional medications. His human applied flower essences to his water and topically as a very dilute treatment for his early emotional isolation.

Once his symptoms were stabilized, Tucker could wear a cone instead of a full head bonnet. Using Metagenics probiotics and liver-support herbs, we then built up his system.
Over the following weeks we used NAET to identify Tucker’s food triggers. We found that he can’t eat any grains or chicken.

After a year of treatment, Tucker is almost normal. We rotate protein sources every three weeks, use herbs to regulate his immune response, and keep him away from vaccines altogether, running antibody titers when possible. Once we get him off all conventional medications, Tucker should enjoy a relatively normal life and life span.

See Part 2 of this topic here. 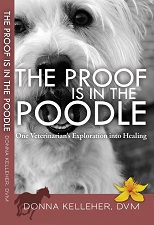