Immune-mediated disease refers to a disease state in which the immune system either attacks the body’s own tissues, such as with Lupus, Pemphigus and Hemolytic Anemia, where the immune system attacks the body’s own muscle tissue, joints, skin or red blood cells, or through its inappropriate behavior. This latter group may include almost any chronic disease including Inflammatory Bowel Disease (IBD), allergies (including ear infections and itchy skin), cancer, certain forms of arthritis, certain epileptic conditions, ankylosing spondylosis (fusion of the spine), and organ disorders such as liver and kidney disease.

Many of these inappropriate immune responses may be ignited by a vaccine, the animal’s diet or an environmental trigger. The immune response may be a decreased function, an increased function, or a combination. For example, in the case of allergies, mast cell activity may increase setting off thousands of overactive proteins. But over time, these heightened cellular processes make the immune system under-functional.

Often the Western medical approach is to suppress the immune system with corticosteroids and chemotherapy (such as systemic cyclosporine). While this approach may be acutely necessary to save the patient, the long term outcome is often cellular malfunction. Toxins build up in important cells and are unable to exit the cell through normal metabolic pathways. Thus cells are forced to drown in their own waste. This is known as oxidative destruction. Because it affects the most metabolically active cells, the gastrointestinal tract and the liver begin to operate poorly. This is one cause for “leaky gut syndrome”, and because more than sixty percent of the immune function occurs along the GI tract, immune-mediated disease can get worse or begin to develop into a new set of symptoms.

A holistic approach is to use NAET in identify and treating food allergen triggers. For example, one form of epileptic seizures is caused by food allergies, and grains seem to ignite some dogs into having seizures. Sometimes, controlling and redirecting the diet can prevent seizures. A second-tier approach involves prescribing specific homemade diets based on potential food allergens and balancing the energy of the patient from a Traditional Chinese Medicine point of view. The third tier is to prescribe specific herbal medicines to balance energy and alleviate symptoms. The fourth tier is to use acupuncture to do the same thing, as well as remove energy blockages, reduce acidity by detoxification and increase neuronal and immunological healing.

Using all of these approaches in a coordinated fashion, many of these previously irreversible chronic conditions are either cured entirely, or the symptoms are controlled with minimal pharmaceutical intervention. This trusts the body’s inner vitality and its innate ability to heal. Success depends on owner commitment, timely treatment and the patient’s energy flow. 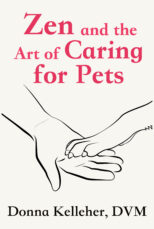